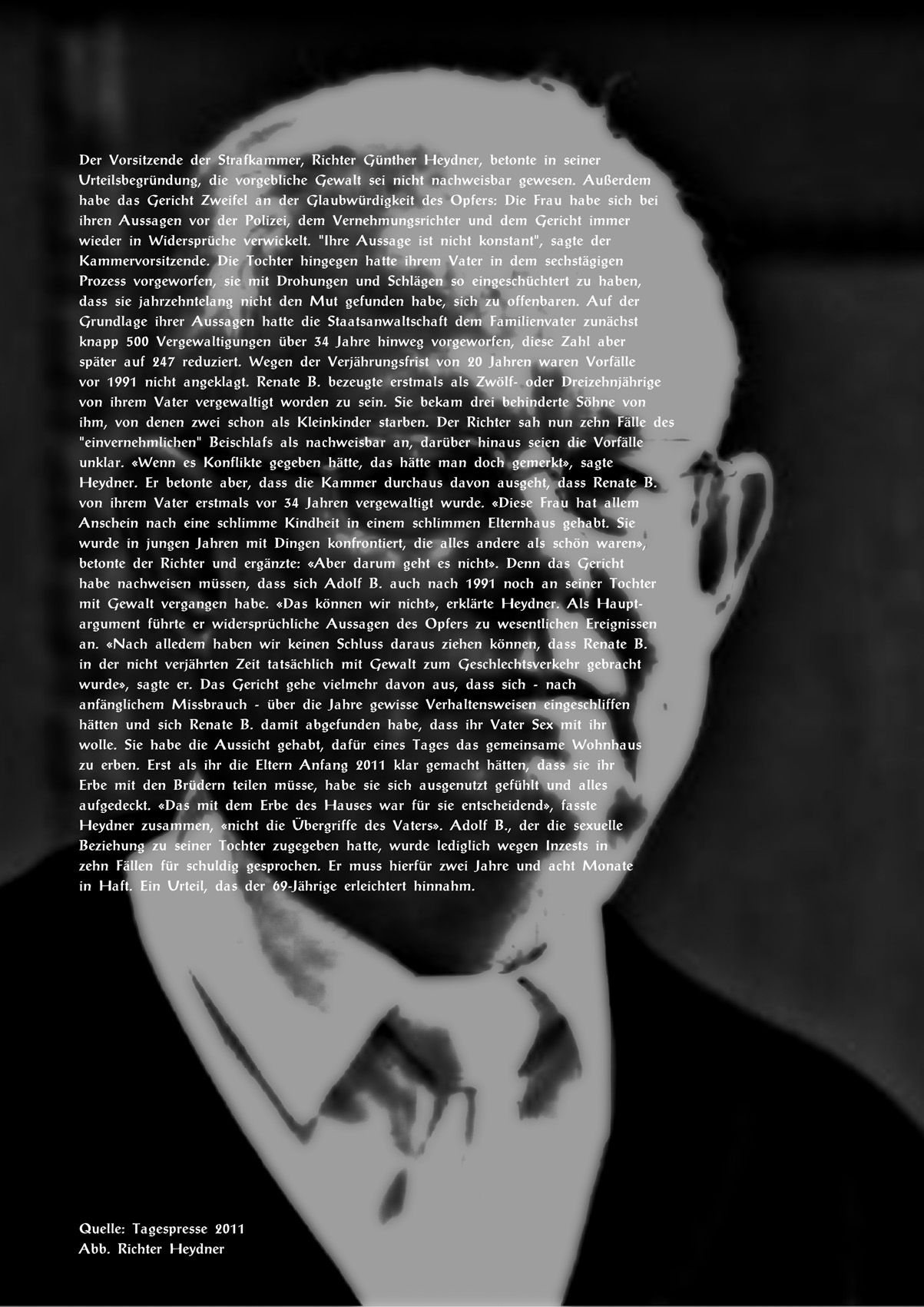 Judge Günther Heydner, when passing sentence in the criminal court, emphasised that there was no conclusive proof of the alleged violence. He added that the court doubted the victim was telling the truth, because in her statements to the police, the examining judge and the court, she had repeatedly contradicted herself. “Her statements are not consistent”, stated the judge. However, the daughter in question had insisted during the six-day hearing that her father had so severely intimidated her by means of threats and beatings that she had needed decades to summon the courage to speak out. On the basis of her statements, the court had initially charged the father with almost five hundred cases of rape perpetrated over thirty-four years, but it later reduced this number to two hundred and forty-seven. Since cases cannot be pursued after a lapse of twenty years, no charges could be brought for incidents said to have occurred before 1991. Renate B. first bore witness to having been raped by her father at the age of twelve or thirteen. She gave birth to three disabled sons, fathered by him, of whom two died as small children. Judge Heydner then said that ten cases of intercourse were verifiably “consensual” and earlier incidents unclear. “Had conflicts taken place they would have been noticed”, he claimed. Heydner did emphasise, however, that the court believed Renate B.’s father had raped her for the first time thirty-four years earlier. “By all appearances, this woman had a bad childhood in a terrible parental home. She was confronted at a tender age with things that were anything but nice,” he said, before adding: “But that is not of issue here”. For the task of the court, he said, would be to prove that Adolf B. forced sexual intercourse upon his daughter also after 1991. “And this we cannot do”, explained Heydner. His argument rested mainly on the contradictory statements made by the daughter about certain significant incidents. “Accordingly, we have been unable to ascertain whether violence was used to force Renate B. to have sexual intercourse prior to expiry of the statute of limitation” he said. The court assumes, rather, that certain patterns of behaviour had set in over the years – after the initial abuse – and that Renate B. had accepted the idea that her father wanted sex with her. In exchange, she reckoned, she would one day inherit the family home. It was only in early 2011, when her parents made clear that she would have to share the legacy with her brother, that she felt exploited and therefore exposed what was going on.
“For her, inheriting the house was the decisive factor”, Heydner concluded, “not her father’s attacks”. Adolf B., who had admitted to having a sexual relationship with his daughter, was found guilty only of ten counts of incest. For this, he was sentenced to prison for two years and eight months – a verdict that the 69-year-old accepted with evident relief.
Source: Die Tagespresse 2011
Photo: Judge Heydner